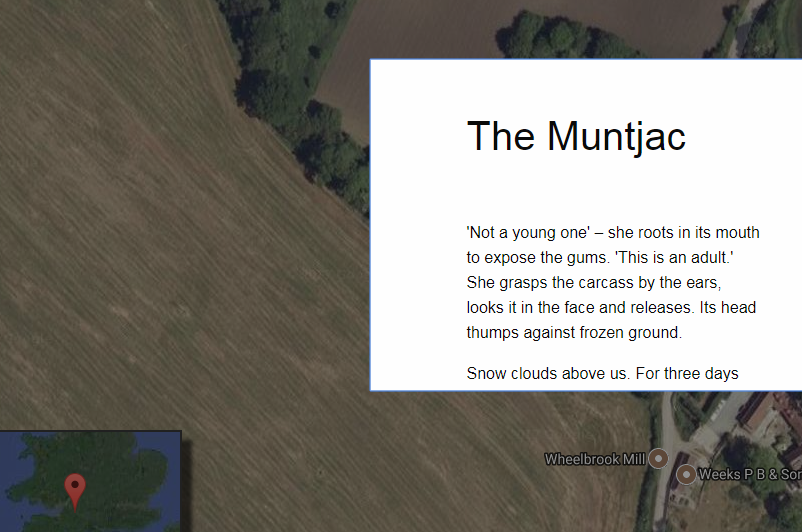 The Poetry Map is a collection of 67 poems arranged against the backdrop of a map – with
each poem located at the site of either its location or composition. The poems are divided
into four distinct paths, and can also be accessed in a random order. The reader navigates
across the map as they read the poems. Further, a number of ‘magic tickets’ reveal bonuses
such as audio recordings, images and videos as you travel.
The Poetry Map is designed to make poetry more accessible, and to contest the assumption
that poetry which appears online is of less value than poetry appearing in a poetry journal.
The four sequences are only available through this interface and will not be published in
hard copy. This recognises the fact that there is a substantial difference between reading a
poem online and reading a poem in a book. Just as the sequences would not necessarily
work in book form, neither would poems that work in a book necessarily translate to the
screen. While ordering them, I found that often the ‘better’ poems did not work on the screen
– I needed poems that were quickly graspable and led one to ‘read on.’ So the four
sequences went through many permutations to create the optimum ‘reading’ experience.
The length of each sequence was also an issue – with the potential distractions that exist
online (not present in a book) I needed to create four sequences that were readable in one
sitting, before one was tempted to check one’s mails or click on a newsfeed.
Similarly, I did not want to throw the digital kitchen sink at the project simply because I could.
I found that some readers – perhaps more practiced poetry readers – found the additional
features a distraction, while for others it was the ‘treasure hunt’ of revealing these features
that drew them through the poems. An additional consideration is that the poems already
have a visual element to them. Each path follows a different trajectory, and the poems’
themes are often reflected in the topography, be it a dense cityscape, a forest in the Czech
Republic or a a ferry terminal in the South of England. The third sequence, principally set in
Eastern Europe, differs in visual tone from the others with its occasionally blurred maps,
giving one a sense of being at a distance, almost out of reception.
The concept of the Poetry Map is to cast the reader adrift in the poems. The cartographic
background provides a handrail of sorts, while a different kind of mental territory is
simultaneously traversed. The interface is attractive, and draws many people in before they
realise it. Simultaneously, the information gap (where will the next poem take me?) engages
the interest. This accessibility led me to capitalise on the site’s potential and create
user-friendly worksheets for students and teachers, which are available on the site.
The Poetry Map has been described as ‘a wonderful concept perfectly realised’ that ‘makes
the poems so readable and moreish,’ whilst students have described feeling ‘like a detective
working on a case’ ‘needing to put on my thinking cap’ and the map itself as ‘unlike anything
I’ve ever seen.’ The Poetry Map has been used in schools across the world from a university
in California to a primary school in Somerset, England.
However, while the Poetry Map enables students to learn to navigate a world in which not
every detail is known, what John Keats referred to as ‘negative capability’, this is not an
experience designed exclusively for students. It can be enjoyed by anyone, with a declared
interest (or not) in poetry.

Modality of presentation: Web based work
URL to work: http://www.mattbryden.co.uk/Matt_Bryden/PoetryMap/