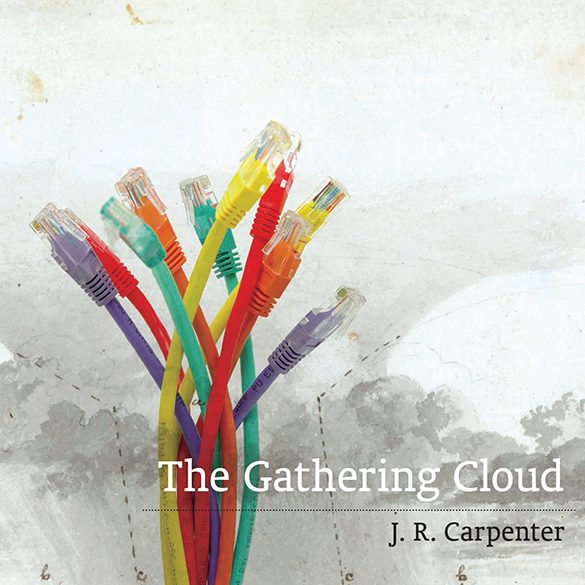 The Gathering Cloud is a hybrid print and web-based work which aims to address the
environmental impact of so-called ‘cloud’ computing by calling attention to the materiality of
the clouds in the sky. Both are commonly perceived to be infinite resources, at once vast
and immaterial; both, decidedly, are not. Fragments of text from Luke Howard’s classic
Essay on the Modifications of Clouds (1803) and other more recent online articles and books
on media and the environment are pared down into hypertextual hendecasyllabic verses.
These are situated within surreal animated gif collages composed of images materially
appropriated from publicly accessible cloud storage services. The cognitive dissonance
between the cultural fantasy of cloud storage and the hard facts of its environmental impact
is bridged, in part, through the constant evocation of animals: A cumulus cloud weighs one
hundred elephants. A USB fish swims through a cloud of cables. Four million cute cat pics
are shared each day. A small print iteration of The Gathering Cloud shared through gift,
trade, mail art, and small press economies further confuses boundaries between physical
and digital, scarcity and waste. A print book edition of The Gathering Cloud, featuring an
extended essay by the author, a foreword by media theorist Jussi Parikka and an afterword
by poet Lisa Robertson, was published by Uniformbooks in April 2017.
The Gathering Cloud was commissioned by NEoN Digital Arts Festival, Dundee, UK, 9-13
November 2016.

It won the New Media Writing Prize 2016, was shortlisted for the ELO Prize 2017, and was an Editor’s Pick for the Saboteur Awards 2017.

Modality of presentation: Web based work
URL to work: http://luckysoap.com/thegatheringcloud